You are here: Home / Key 6. The ‘Ohana in Business Model / Seek Bigger Visions

Funny how the world will conspire.

When I posted Seek A Better Mission just before this, I did not anticipate sharing this as a followup. Yet sometimes, something you cannot fathom in one day, will become overwhelmingly obvious the next.

We need bigger visions too.

Not bigger in the sense of being more ambitious or grandiose, but bigger as without blinders or shallow sight: We need to work at seeing how our visions of the possible (and probable) future are connected to other happenings in the world. We need to do a better job at seeing their variables, many of which have to do with change we can see right now. 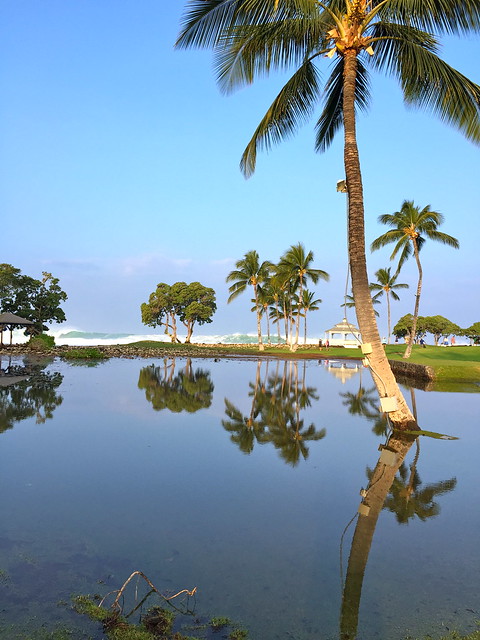 This is not a photo of tropical skies and pretty resort pond reflections. Look in the foreground and you see the landscape rubble. Look in the distance, and you see winter surf roaring. Those tiny people at the shoreline near the gazebo, are watching a Hawai‘i island Fire & Rescue copter drop a basket to a foolish surfer who thought he’d take on the big surf challenge, and failed.

Coupled with seasonal winter surf, the ever-rising, climate-changed high tide at 5:30am the morning of January 22, 2015 brought saltwater inundation, beach erosion, landscape and property destruction to the grounds of the Fairmont Orchid, Mauna Lani, including the historic Keanapou fishpond at Coconut Grove. 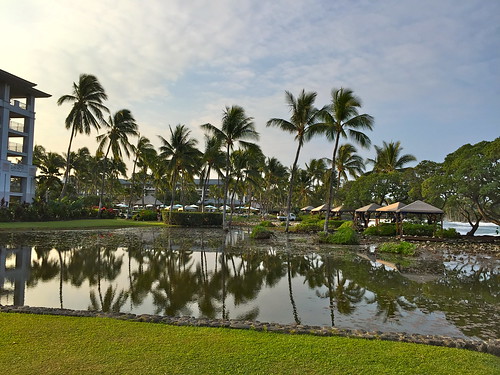 My husband works there, and he called in the morning, saying, “Wait until you see the pictures; you won’t believe this.” Patience has never been my strong suit, and he was about to pick up a shovel and pitch into the clean-up effort, so I hopped in my car and drove down to take a look.

In the picture above, I am standing on a grass stage. A huge puddle of seawater covers the green lawn where an audience up to a thousand people strong will often sit, and nearby, a Convention Sales Manager is grilling the hotel’s Landscaping Manager for an answer: “How long before the lawn can be set again? Just how much damage can saltwater do?”

She didn’t like his answer. Having been in her shoes once, I could easily imagine the difficult phone call she would have to make to the meeting planner scheduled to bring guests here next. 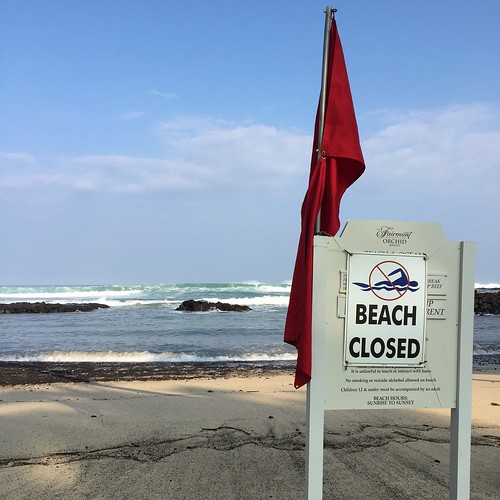 The place is a mess. It can be cleaned up, but healing the land itself takes time. The puddles-turned-ponds will soon be gone, drained by seepage and evaporation, but the salt will have turned everything brown.

This beach is normally covered in row upon row of beach chairs, and the wrap-around sidewalk is covered with as much as a foot of sand in parts: 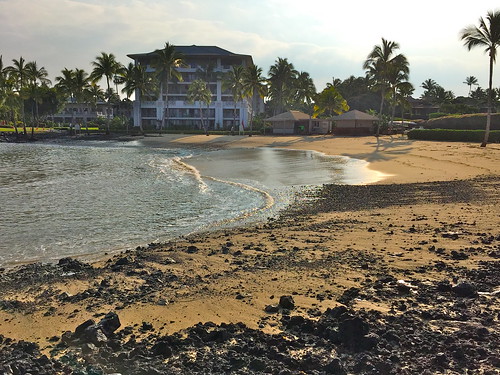 Winter surf can be a problem every year, but this is the worst hit I’ve seen on this stretch of shoreline since we opened this hotel for Ritz-Carlton 26 years ago, even worse than the tsunami that shuttered Kona Village in March of 2011. The difference was wrap-around wave action then, while yesterday was a direct hit and the ever-rising high tide. We simply cannot deny climate change; it is very real, and shoreline developers best take heed in whatever new visions they begin to concoct. Existing landowners have growing challenges ahead, for “sea level” is no longer a fixed variable. 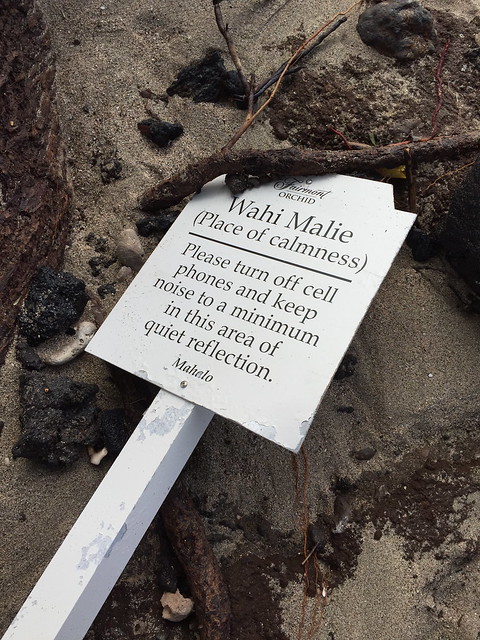 How costly must a deterrent to the broken business model be?

At the Hualalai Resort farther up the coastline, just south of the still-closed Kona Village, shovels had been useless after winter surf since their opening in 1996. They invested in large heavy machinery to move the sand, soil, coral and rock which scatters each winter, and covers guest walkways with rubble. The dunes human labor creates in dealing with the erosion, and in trying to protect their seaside anchialine ponds, are now more than 8 feet deep. I can think of many other ways to use that money, and to direct all the labor expended winter after winter. The initial decision to be so close to the shoreline was faulty to begin with, and costs continue to rise.

A few years later, the developers of the neighboring Kūki‘o residential resort ignored these lessons, and maee the very same mistakes, all to sell “white water real estate” — home sites or amenity buildings close enough to see the waves break near shore.

It was heartbreaking to watch the hotel staff scramble after this latest seawater inundation, and not just landscapers. Banquet staff, engineers, security guards, admin assistants… anyone available picked up a shovel and pitched in. The camaraderie and their “we’ll do what it takes” attitude inspired, as did the kindness of several hotel guests who felt concerned rather than inconvenienced, however it also illustrated just another way the resort hotel development business model has been broken, and has failed to readjust itself. When these weather calamities hit our southwest shoreline, my soft spot of concern are the anchialine ponds in light of all I have learned about them. I go to check on them first.

If my tone here is a bit direct, the fragility of our limited natural resources are a big part of the reason why. I am wearied by their damage, even after trying my best to see it as Mother Nature’s way. In comparison, our human action, or inaction, cuts to the bone.

When weather opens a pond up to the sea, they essentially can no longer be considered true anchialine ponds, which are defined as ponds with brackish water having no surface connection to the sea, yet exhibiting tidal rhythms due to a subsurface connection through cracks and crevasses. Anchialine ponds are exposed portions of the groundwater table, and a window into the vast underground realm where virtually nothing is known about numerous creatures that inhabit the earth’s darkness below us. Rare and unique groups of aquatic creatures inhabiting this subterranean realm will come to the pools of the anchialine ponds to feed.

This is a trio of blog postings I had written for Talking Story after the Sendai tsunami of March 2011 reached our shores:

This is what a large amount of turbulent seawater will do to these ponds, and healing is a very slow process: 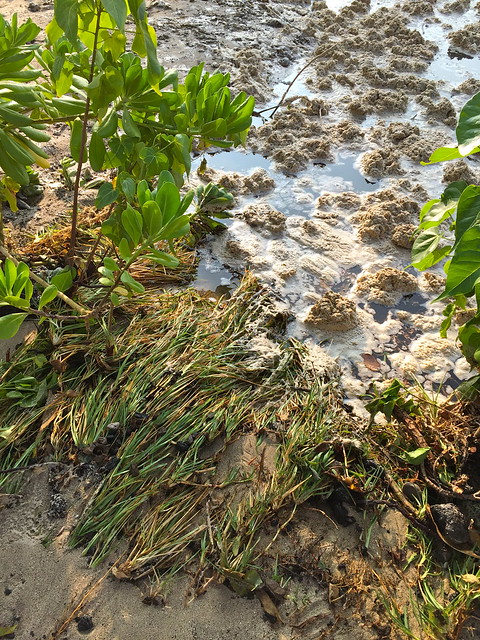