“We are made to persist. That’s how we find out who we are.”
—Tobias Wolff
Wonderful quote for our value of Ho‘omau, isn’t it?

We humans run so many thoughts through our brain… it’s astounding when we’re actually able to focus on them.

I used to be one of those people who would say, “I’m just not an idea person, though I wish I were.” until a mentor challenged me, saying, “Don’t you ever say that to yourself again.” She was emphatic in pointing out human beings get ideas all the time, and that our challenge is in netting them and hauling them in, because there are so many idea connections vying for our attention, and “ideas are like darting fish.”

I loved the picture she painted for me: Some ideas are big fish, and if we’re truthful, we admit they intimidate us and we hope they escape our net. Some ideas are smaller, and not quite ready for us, and they escape through the open weave pukas (holes) of the net, however they stay in the swirling water, where they’ll grow up.

On most Sundays, I go fishing

Sometimes, I’ll run across an article online, that makes me stop and consider; “I used to think about this very issue, why didn’t I go anywhere, or do anything with it?”

That was the case this morning, when I read this from Yes! Magazine:

6 Ways We’re Already Leading an Economic Revolution
From the “buy local” movement to public banking, we’re well on our way to a more democratic, cooperative, and people-centered economy.

You’ll have to read the article first, to know what I’m talking about in the rest of this post. Or you can just keep the darting fish in your mind’s net, stop reading, and ‘go fishing’ on your own with another topic.

It’s funny being an American, ‘funny’ being the only descriptive word I can think of at the moment. I like to tell myself I can be a bit more objective than subjective about all-things American, because I was born in the Territory of Hawai‘i and we weren’t the 50th State yet. It is another one of those self-fulfilling affirmations I coach myself in though, for I was all of 5 years old when I became an American.

Anyways, “the very issue” I used to think about, which the article first brought back to mind for me, was my agreement with author Gar Alperovitz’s assertion that America’s dominance isn’t necessarily something we should be proud of:

“Many years ago, while researching the history of the U.S. decision to use atomic weapons on the people of Japan, I came to understand something: There was something deep at work in the American political and economic system driving it toward relentless expansion and a dangerous, informal imperialism. I began thinking about how to fundamentally change America out of concern with what America was doing—and is still doing—to the rest of the world.”

This one is tricky for me —a big fish— because we in Hawai‘i largely feel we were conquered by sneaky governance while a U.S.Territory. We didn’t become Americans by choice, though I speculate my parents would have voted in favor of statehood… my dad was an army veteran proud of his time served in the Korean War in the years just prior to marrying my mom and my birth.

I do think, all these years later, that we Americans are “too big for our britches” an ironically American phrase. We are so presumptuous, in thinking our problem-riddled democracy will prove to be the one right answer for everyone else.

“Many experiences since—especially working in the U.S. House, Senate, and at upper levels of the State Department trying to resist the war in Vietnam; and thereafter with activists in the antiwar and civil rights movements—taught me something important: It wasn’t enough to stand in opposition to the injustices America inflicted on the world and its own people. It was equally important for these movements to operate with an idea of what they want instead.

Could we imagine a system that undercuts the logic responsible for so much suffering at home and abroad?”

This applies to so many things, doesn’t it? We bemoan something we don’t like, loudly and with deep emotion, without first having the clarity of knowing what we want instead.

A good question to add to your self-coaching arsenal, a question triggered each and every time you’re upset about something, should be: What exactly, do I want instead? And further: What can I offer, and suggest?

Or the uncomfortable one, to push you out of your comfort zone and into the frying pan:
How can I be leading, or at the very least, participating?

For instance, far as I’ve been able to research it, options with self-determination eluded us while the U.S. Territory of Hawai‘i… it was either the old monarchy or statehood, and no other compelling ideas emerged. That was the fish which got away. 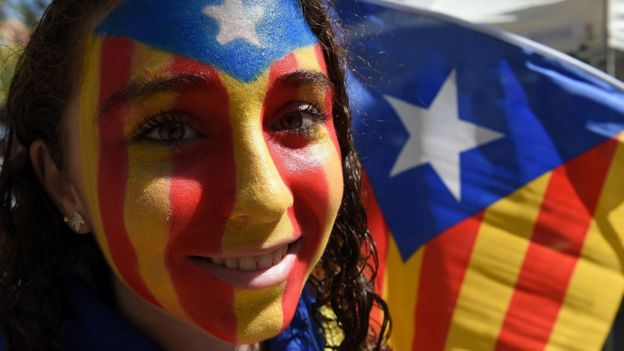 AFP: A Catalan demonstrator with her face painted in the pro-independence colours in Barcelona

So Gar Alperovitz put his thoughts into what he wanted instead, sketching out the idea of a “pluralist commonwealth.” He gave the fish he would keep in his net a name.

We have talked about naming ideas before; it’s a smart thing to do. Vocabulary and lexicon rocks. Everyone in the fish-eating world today knows what mahimahi is.

In naming one of your ideas, even when still a smaller sized fish, it’ll grow into it’s name. It certainly helps in getting that clarity with what you really want instead. I mean a fish is a fish, yet just think of all the different ways it can be prepared when you need it to be the meal that feeds you.

Plus when you name something, you can more easily talk story about it, and make smart videos about it too.

So, after I watched the video, and read the rest of Gar Alperovitz’s article, outlining the 6 Ways We’re Already Leading an Economic Revolution, and about how “From the ‘buy local’ movement to public banking, we’re well on our way to a more democratic, cooperative, and people-centered economy.” I tweeted out:

“This should be required reading before your next pow wow to update/innovate your business plan we can do better.”

“Business 2016 is not Trump, is not Wall Street: The rest of us must stand up for ourselves, demonstrate how we excel and contribute.”

This is a fish I’ve kept alive in my fishing bucket lately. I am a manager, and I am a businesswoman, and I get pretty bothered by the news reported on business —Case in point, Fortune: Customer Disservice Is the World’s Hot New Business Model, just plain wrong on so many levels.

We aren’t all that bad! I understand how media boosts the negatives to secure more attention for their broadcasts, turning so many of us into frenzy-feeding piranhas, yet that begs the same question, doesn’t it? What do we want instead?

I really need fresh water in that bucket. Poor fish.

I will leave you to read more about Gar Alperovitz’s 6 Ways We’re Already Leading an Economic Revolution: They’re good, and they’re encouraging.

I was serious about my suggestion that we in business can benchmark them, and chum the waters wherever we fish for a fresher catch in our business plan nets.

So many more fish in the sea.

My Sunday reading has become the primary reason I still use Twitter as one of my social media preferences. The linkage that streams by will point me to several reading sources I never would have sought out on my own. Instagram is similar, though slightly different:

“There is power in picking up a camera each day, saying yes to creativity. It reminds us to explore where a story might lead, to stretch in the direction of the honest and the curious, And with that art, comes questions — why’s, what’s and how’s.”
—@artifactuprising on Instagram 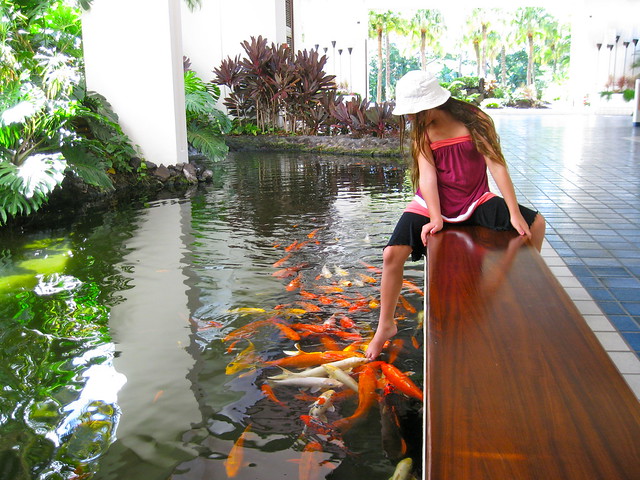 You can access the Sunday Mālama archives via this category link.

Our #AlohaIntentions value for the month of September, 2016 is Ho‘ohana as our Work Ethic.