When elders die, we newly appreciate them, often more so than while they lived, and were still able to teach us.

We miss them, when we could have remembered them in a far less disconnected way.

Does our hindsight help us live differently?

As I remarked on Twitter when first hearing that Elie Wiesel had died,

Whenever Elie Wiesel’s name came up, I would think of this quote. He stood for Pono, Kuleana, and Ho‘ohanohano to me:

“We must always take sides. Neutrality helps the oppressor, never the victim. Silence encourages the tormentor, never the tormented. Sometimes we must interfere,” he said. “When human lives are endangered, when human dignity is in jeopardy, national borders and sensitivities become irrelevant. Wherever men or women are persecuted because of their race, religion, or political views, that place must—at that moment—become the center of the universe.”
— Elie Wiesel 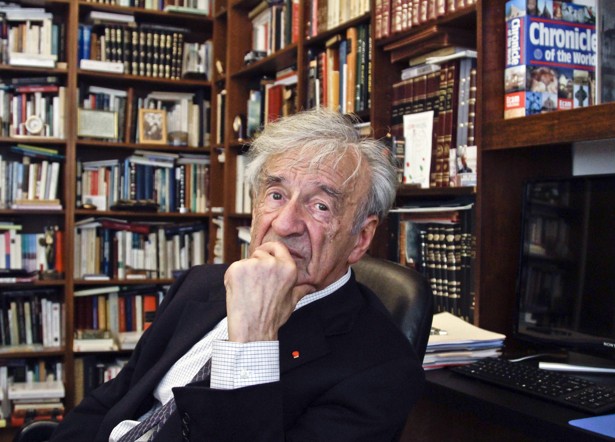 Elie Wiesel in his office in 2012. Photo by Bebeto Matthews / AP

Tributes have been flooding in for both men, and I’ve read a generous lot of them, thinking about how interesting and fascinating they were, each in their own way, and thinking about their signatures on Leading with Aloha over and over again.

These were two of my favorite reads about Bill Cunningham and his enchanting life: “Bill on Bill,” a New York Times autobiographical essay published in 2002. I wondered: What if I had read that back in 2002 when it was first published? He had such a storied life! Would I have looked for Cunningham on his bicycle (take a look at this Google search!) when I went to New York soon thereafter?

Or, I could have looked for him at Stage Star Deli: Every Christmas, Bill Cunningham Had a Special Gift for These Deli Workers. We might have had coffee together…

Who are your elders?

Bill Cunningham and Elie Wiesel were not in a circle of elders I personally knew, and could approach for conversations over a glass of wine, or as we walked our dogs in a public park —though you can bet I certainly would approach them to say, Aloha, and, Mahalo for all you have given to our world, if I did in fact see them in that park, and I recognized them!

However, their passing makes me think about the elders I do know — those we call Kūpuna in Hawai‘i. They are elders we should be appreciating alive while we can, and learning more from.

“As I approach my 75th birthday, I find myself often thinking about mortality. I’m in the last part of my life, and that’s reality. This is the time when we must fulfill our most important duty: to reflect on a lifetime and then sift through the detritus of experience, observation, and thought in order to winnow out lessons to pass on to coming generations.”
—
“I’m lucky to have arrived at a time in my life when I am freed from the encumbrances of making money, seeking fame and power, and showing off. We elders have no hidden agenda and can speak the truth. One of the most influential groups in the peace movement was the Retired Admirals and Generals Against Nuclear War, warriors who had played by the rules through the military ranks, but once retired, could speak openly and honestly.”
—
“During the ’80s and ’90s when battles raged over forestry practices, one of my most formidable opponents was the CEO of a large forestry company. Arguing that dioxin production in pulp mills was minuscule and that his clear-cut logging was allowed by government, he bellowed, “My job is to make money for my shareholders. If you don’t like the way my company operates, your complaint is with the government because everything we do is within the law.” On retiring and being freed from the corporate game, he became a generous supporter of my foundation. Maybe someone should start a Retired Corporate CEOs and Presidents for the Environment.”
— Geneticist and environmentalist David Suzuki writes, We have much to learn from our elders.

If you would, please think about that on this Sunday, and converse with your elders too.

You can access the Sunday Mālama archives via this category link, also residing on the right-hand sidebar.