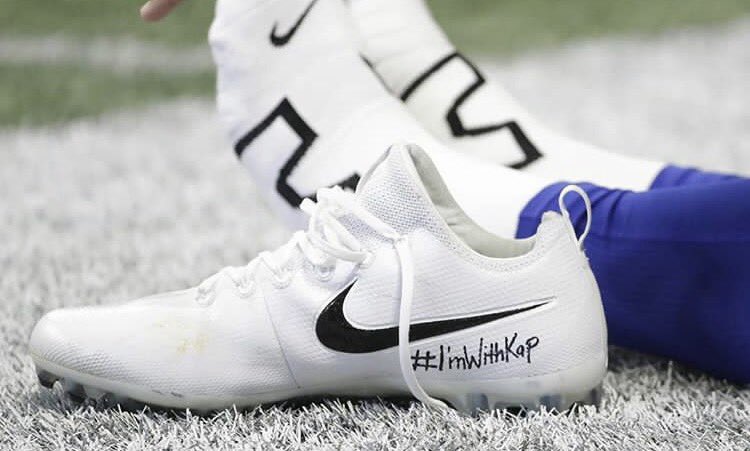 A week after 12 Buffalo Bills took a knee during the national anthem, Bills wide receiver Kaelin Clay wore a pair of cleats to show support for Colin Kaepernick during warmups.

I received this text on Sunday, as televised coverage of the football games began;
“You’re a psychic Rosa! How did you know Lōkahi would be so relevant right now, with these #TakeAKnee protests?”

Our Value Immersion for September, 2017: Lōkahi

Have the NFL controversies —plural, with more than one issue to be talked about— been serendipitous given our current Ho‘ohana Community study of Lōkahi? Yes.

Surprising? No. And I’m certainly not psychic… this actually happens pretty often for us, that issues of the day can be seen and reflected on through whatever value lens current to our value-of-the-month immersion. That’s exactly the learning benefit values immersion is meant to give us,
—helping us to be open-minded (no blame, just help),
—helping us to be critical thinkers intent on uncovering truth within cognitive biases, and
—helping us to seek the good and the better within us as we choose our next actions as the consequence of the reflection we have done.

As for Lōkahi, a resounding YES, in that it is thoroughly relevant right now. For that, I’m filled with another value, Mahalo, “thankfulness for the elements which make our lives so rich and meaningful.”

Screen capture from Aaron Rogers’ Instagram, shared by Richard Chambers with, “Whether you like American football or not, there is a massive social/cultural/political moment in the U.S. happening today.”

I feel it’s important however, to point out that the NFL “unity” response is actually a case study for us in what the unity of Lōkahi is NOT.

The way I see it, the NFL owners have orchestrated and directed a ‘link arms, or stay in the locker room, or do it on your own time’ response which still skirts the issue: It fails to address the racism or police brutality that Colin Kaepernick had initially taken a knee during the national anthem for, losing his NFL career as a consequence.

There is only one belief I see the NFL completely unified behind: Football is big business for us, and we must defend it. For me, it is impossible not to immediately think of slavery when I see photos like this one: 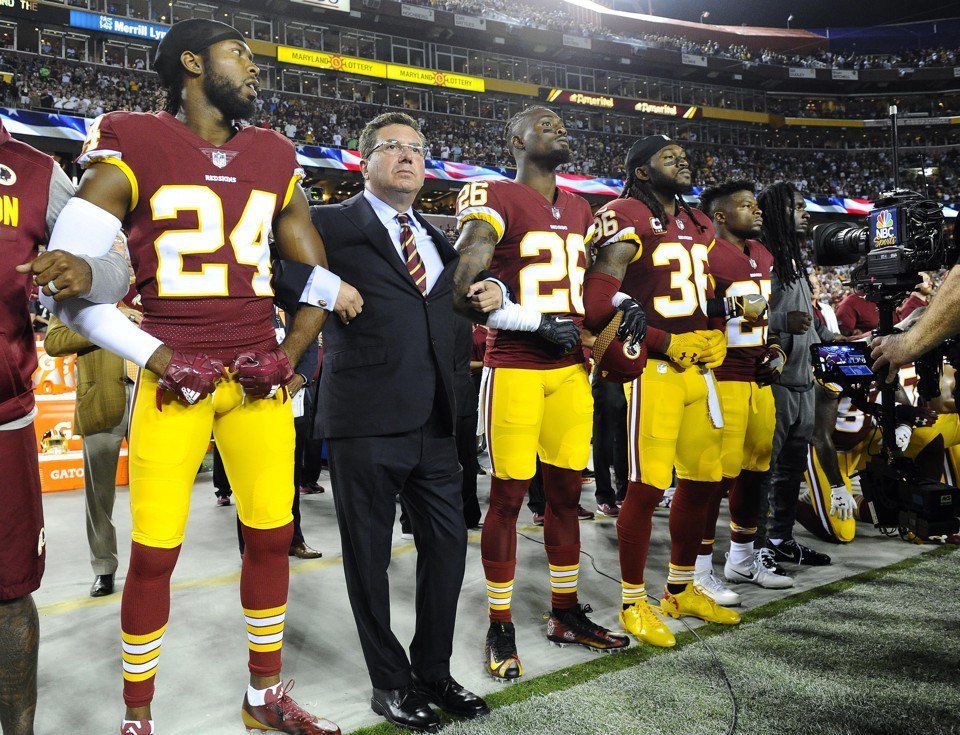 The Washington football team owner Daniel Snyder stands with the players Josh Norman, Bashaud Breeland, and D.J. Swearinger during the playing of the national anthem before a game against the Oakland Raiders at FedEx Field. Image from: A football fan says goodbye to the NFL, a year after Colin Kaepernick’s first kneeling protest, by David Dennis Jr.

I feel for the players, most of whom it seems, do want to stand up for Colin Kaepernick or for their own convictions, fully knowing they earn lucrative paychecks given to them with expectations of loyalty to the franchise above all else.

While some of the NFL’s gestures of “resistance” were undoubtedly sincere (and some players, such as the Seahawks’ Michael Bennett, have made clear that they support the same cause as Kaepernick), other protesters in the league were less open about their motives. Some displays were disjointed: The Steelers deciding to not take the field for the anthem, with the exception of the army veteran Alejandro Villanueva, who later apologized to his teammates for not joining them, was more awkward than effective. Other efforts were virtually meaningless, like the Cowboys taking knees before the anthem only to lock arms and stand during it.

Of course, many observers still took umbrage. Baltimore Ravens fans signed a petition to remove Ray Lewis’s statue from the front of their stadium after he was seen kneeling with his former teammates during the anthem. DirecTV is reportedly offering NFL Sunday Ticket refunds for fans offended by protests, and Trump has continued his heated commentary about the league over the last week. As a result, friends and Twitter followers familiar with my stance have asked if my boycott has been complicated by the fact that others are now boycotting for the exact opposite reasons.

Will my message get lost if my tactics are essentially the same as those of people cheering Kaepernick’s unemployment? I don’t think so, especially not if I continue to be vocal about my beliefs and advocate the values behind my choice within my own circles.
—David Dennis Jr. for The Atlantic: Deciding to Skip the NFL Season

I think David Dennis Jr. has a good prescription (my bolding above) for all of us.

Boycotts are usually moderately or temporarily effective, if at all. What we can do however, is to be better, and set our Alaka‘i example of what Lōkahi unity is really all about, when truthful, when authentic, and when comprehensively, completely Kākou—for everyone involved.

We have talked about how money need not be ‘evil’ and how all other business motivations should be clear. Work to make it so in your own circles of influence, whatever they may be. Use the issues of the day, like this one within the NFL, as your talk story triggers, and apply the values which lead you to your good, your better, and your best.

Dedicate your October to truthful, authentic Lōkahi unity, and be the Alaka‘i manager and leader our world needs to look up to. Step up to your responsibility for good management and leadership: I believe in you.
Rosa

Alaka‘i is the Hawaiian value of leadership, and it is a quality desired both in managing and leading. It includes coaching, guiding and mentoring others to support their growth and self-development. Those who are Alaka‘i lead with caring for others. Courage and initiative are important, yet secondary. And this is critical: To be Alaka‘i is to lead and manage with good example, for your own actions will groom your empathy.